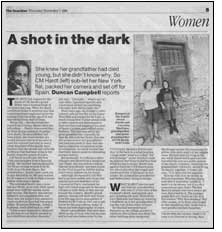 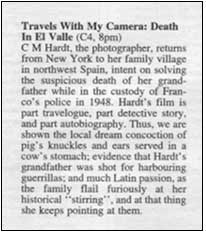 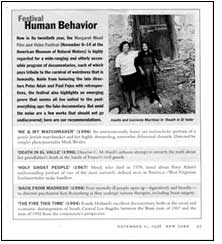 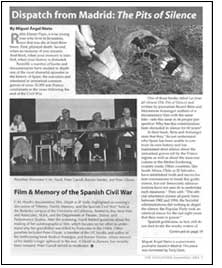 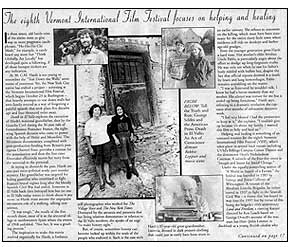 “ The OFFICIAL reason for the death of CM Hardt’s grandfather was a haemorrhage of the brain and lung. What the death certificate failed to mention was that a more pertinent explanation for the ending of his life at age of 35 was that he had been shot 10 times…...[Hardt] bought a video camera, sub-let her flat on the Upper West Side and headed for El Valle. A brash young New Yorker armed with a video camera and determined to find out what had happened in a part of Spain’s hidden past ruffled many feathers. “

“…Thus, we are shown the local dream concoction of pig’s knuckles and ears…, evidence that Hardt’s grandfather was shot for harboring guerrillas; and much Latin passion, as the family flail furiously at her historical “stirring’, and at that thing she keeps pointing at them.”

Travels with My Camera (C4) sends New York photographer CM Hardt back to her roots in north-western Spain, digging around for the truth about what happened to her grandfather, shot by Franco's police in the late Forties. He was, it transpires, an underground guerilla fighter who had refused to accept El Caudillo's victory in the Spanish Civil War. "I knew nothing then, and I know nothing now," says her great-grandmother. She is a sprightly 97 year-old, so maybe she does know something after all.

Whether Spain ever sees [Death in El Valle] is another question. “ I want it to be shown, but it is a very contentious topic there. The few Spanish people who have seen it get very disturbed by it. The younger people feel very much as I do: why this silence? Why this amnesia? But older people, even those who fought on the Republican side, think this is very painful and best forgotten.”

" Closer to home is C.M. Hardt’s Death in El Valle. A Spanish American photojournalist (whose work often appears in the Voice), Hardt leaves New York City to visit family in the Spanish countryside. She hopes to make a film about the Franco era murder of her grandfather but discovers instead the near impenetrability of politics played out on a family scale. Secrets are held by one generation from the next and neighbors deny memory of the past before cheerfully accusing other towns-people of murder and betrayal."

In trying to chronicle the past, Hardt creates part socio-political study, part murder mystery. ……but no one in El Valle today wants to think about it any more, so Hardt must assume the unpopular on-camera role of a walking, talking conscience.

[CM Hardt] has crafted a project …that bravely attempts to tear down walls her own family erected as a way of forgetting a painful episode that took place five decades ago….